Learn How MACRA Will Inflate Your Revenue

By 2018, the Department of Health and Human Services plans to have 90% of the Medicare FFS reimbursements involved in a value-based program.1 By 2020, a task force including private insurance giants like Aetna and Health Care Service Corporation (HCSC) has committed to converting 75% of their business to value-based incentive programs.2 Clearly, there is a demonstrable trend emerging that will be expensive to ignore.The leading program to pay attention to in this major industry shift towards value-based care is the Medicare and Chip Reauthorization Act (MACRA). This post is the first in a series focused on providing you with industry insights and updates that will help prepare you for MACRA and seize incentives now and in the future.

ALERT: This post was published before the release of the MACRA final rule on 10/14/2016. Please view our MIPS website for up to date regulations.

MACRA on a Macro Level 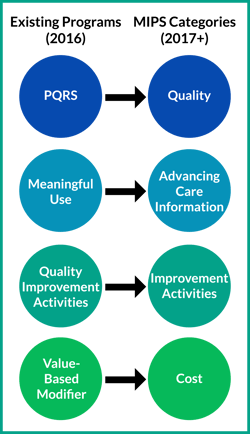 In our upcoming MIPS series of articles, we’ll break down the 900+ pages (Yes, we read the entire document!) of regulations into bite-sized chunks that you can immediately use to start preparing. Whether the regulations take effect in six months or later, the sooner you prepare, the better you’ll do ‘on the curve’.

The proposed rule, titled "Medicare Program; Merit-Based Incentive Payment System (MIPS) and Alternative Payment Model (APM) Incentive Under the Physician Fee Schedule, and Criteria for Physician-Focused Payment Models," was published in the May 9 Federal Register. With a tentative start date of January 1st, 20173, this program may sound new and burdensome, but will be rewarding for physicians who optimize their results and reporting.


Not Preparing for MACRA Will Be Detrimental

How much will your practice gain or lose from quality reporting? With the planned escalation of value-based programs like MACRA, the opportunity exists to significantly boost your revenue, or to see serious losses. Your reporting strategy today directly impacts your revenue potential over the next few years. MACRA alone will allow for a gain or loss of 9% of your Medicare Part B FFS reimbursements by 2022 (based on reporting done in 2020). Better preparing for MACRA now can set you up for success in the long haul. On the other hand, not adapting to new reporting will lead to substantial financial losses.

Table One: Maximum Penalties and Incentives under MIPS

+ Budget neutrality factor is capped at 3.0 for MIPS
* 10% is the “exceptional performance bonus” currently proposed for MIPS

As we move into the second half of 2016, preparing for the impact of MACRA and Merit-Based Incentive Payment System (MIPS), may take up more time than even the most forward-thinking healthcare stakeholders predicted. Successful clinicians will increase their reimbursements. The funds to support incentives will come directly from reduced reimbursements to unsuccessful participants, as MIPS updates the payment model for clinicians in a manner that essentially ‘grades on a curve’. Don’t let that be you!

What You Can Do Now to Prepare for MACRA

Hopefully, I’ve showed you how ignoring MACRA now will only lead to scrambling down the road to prevent further losses, and how effectively strategizing for MACRA can catalyze your revenue. You may now be wondering what actions you can take now to be sure you stay ahead of the curve.

✅ Find a partner for managing the Quality, ACI and CPIA aspects of MIPS (like MIPS PRO or a similar service)

Being proactive now may seem like an unnecessary burden, but in 2022 when you are bringing in a 37% incentive to your Medicare billing and conquering any future value-based programs, I am positive it will seem worth the effort!