Disillusioned About MIPS Incentives? Here’s Why You Shouldn’t Be.

If your organization invested significant money and time into achieving a high MIPS score in 2017, the final incentive payment you received may have felt… well, disappointing. As easy as it may be to recognize the ideological importance of shifting from fee-for-service to value-based care, many clinicians and organizations feel unable to practically justify such an investment in the absence of a meaningful financial incentive.

But there’s good news: incentives will continue to rise in coming years, and those achieving the highest scores will soon find their efforts rewarded on a much larger scale. Here’s why.

Why Incentives Were Low in 2017

MIPS is budget neutral, which means that high participation rates and high performance have the effect of decreasing the overall budget pool for positive payment adjustments. That’s why in the first performance year for MIPS, even though the maximum incentive and penalty adjustment was 22% (when taking into account maximum scaling factor and exceptional performance bonuses), the actual adjustment ended up at a paltry 1.88%.

CMS has made serious efforts to account for industry input and reduce administrative burden. These efforts seemed fruitful this year as they announced an unexpectedly high participation rate, exceeding their goal of 90% overall, and hitting 98% for ACOs and 94% for rural practices. But because performance thresholds were artificially lowered to 3 points, which could be acquired through any submission at all, participating in and passing MIPS was easy.

What Will Change Moving Forward 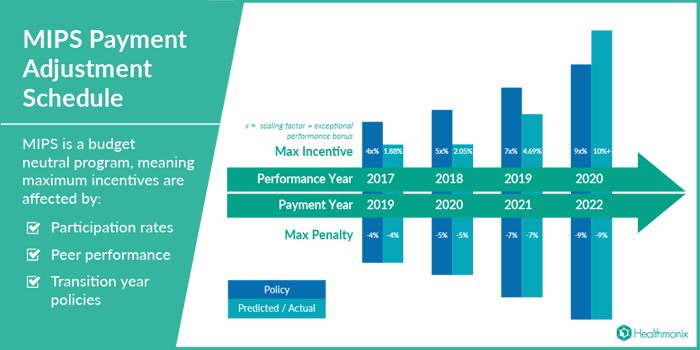 This year, though, MIPS won’t be so easy. In the final rule for 2018, CMS predicts that only 74% of clinicians will earn a score higher than 70%. The minimum threshold rises to 15 points, and in 2019 it will rise again to 30 points. In 2020 it’s predicted to rise even further, to 45 points. Because of this, and also because of the increasing weight of the Cost category and the increased difficulty of the Promoting Interoperability category, submission alone won’t be enough to pass, and overall success will be harder to achieve with each passing year. Consequently, that 1.88% incentive rate will certainly rise.

So if your organization has invested in MIPS and is currently feeling discouraged by the returns, just keep in mind that as penalties and incentives continue to increase, your preparation will ultimately put you farther and farther ahead of those who chose (and continue to choose) to do the minimum.